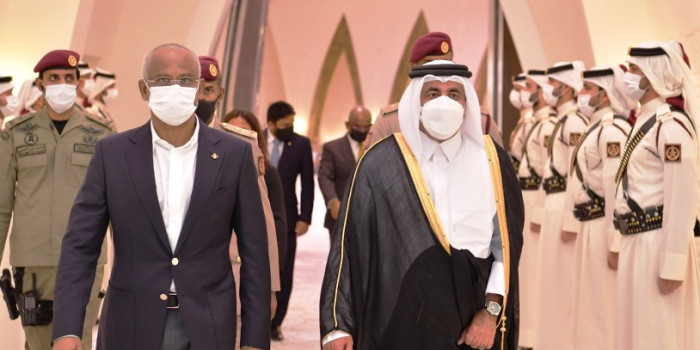 The two leaders further discussed facilitating good bilateral relations and increase mutual investment opportunities, in addition to a range of other matters of mutual benefit. Following the meeting, President Solih and his delegation attended an official lunch hosted in his honour by His Highness Sheikh Tamim Bin Hamad Al Thani.

First Lady Fazna Ahmed was honoured with a private lunch hosted by Her Highness Sheikha Jawaher Bint Hamad bin Suhaim Al Thani, the Qatari Amir’s spouse. In the evening, the President and the First Lady toured the Museum of Islamic Art in Doha, which houses one of the most comprehensive Islamic art collections in the world.

The President and his delegation will travel next to Bangladesh, where he is to attend the ceremony commemorating the ‘Birth Centenary of Bangabandhu Sheikh Mujibur Rahman.’