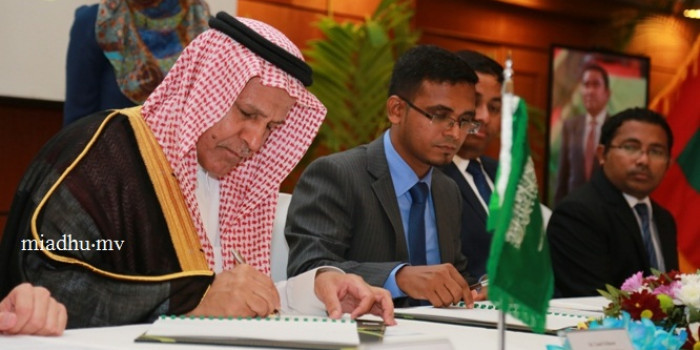 Saudi Fund gives a loan of $100 million for the construction of the new terminal at INIA.

Saudi Fund gives a loan of $100 million for the construction of the new terminal at INIA.

Saudi Fund has given a soft loan of 100 million dollars to Maldives, for the construction of the new terminal at Ibrahim Nasir International Airport.

The loan was given with a grace period of 5 years, and have to pay back within 25 years at 2% interest rate.

Speaking at the ceremony, Mr.Bassaam said that he hopes that with this loan, the government will be able to develop a passenger terminal that can accommodate up to 7 million passengers. He further said that Saudi Arabia is aiding Maldives in several projects, and at the moment Saudi is funding 12 projects with 266 million dollars.

“Saudi Arabia is helping Maldives in several ways. We are providing financial aid to Maldives via organizations like OPEC and IDB” said Bassam.

Both Bassam and the Finance Minister noted the close relation between Maldives and Saudi Arabiya.

Minister Munawwar thanked Saudi Arabiya for their continuous help. “Airport development project is the largest project of this government. 800 million dollars will be spent for the whole project” said the Minister.