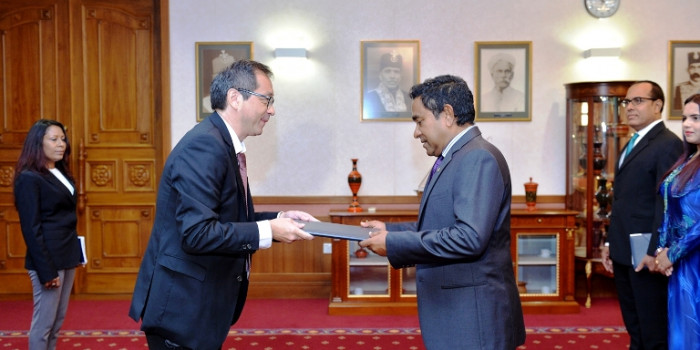 The non-resident Ambassador of the Delegation of the European Union, His Excellency Mr. Tung-Laï Margue presented his Letter of Credence to President Abdulla Yameen Abdul Gayoom, this morning, at the President’s Office.

At the ceremony, the President welcomed Ambassador Margue to the Maldives and congratulated the Ambassador on the commencement of his term, and expressed appreciation for the support and cooperation by the European Union, especially in climate change.

During the call, the President expressed the high importance Maldives attaches to its relations with the EU, and emphasised with appreciation, on the continued cooperation in the areas of climate change, counter-terrorism and the strengthening of the Governance sector. The President also noted with hope and confidence that the relations between the Maldives and EU will continue to strengthen during Ambassador Margue’s tenure.

The Ambassador conveyed his gratitude for receiving him and expressed hope and confidence in the continued support and engagement between the Maldives and EU in the future.
The President was accompanied at the call by the Acting Minister of Foreign Affairs, H.E Iruthisham Adam, Minister of State for Foreign Relations at the President’s Office, H.E Mohamed Naseer and the Foreign Secretary H.E. Dr. Ali Naseer Mohame