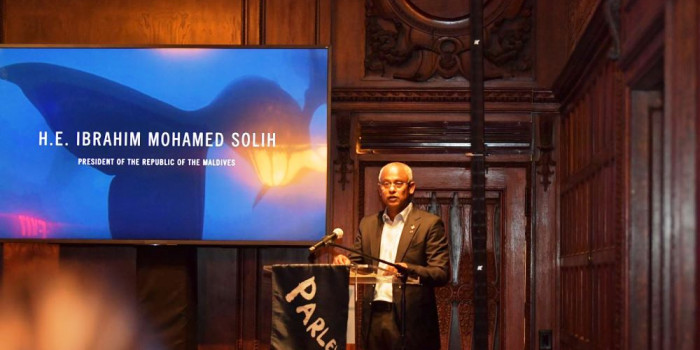 President Ibrahim Mohamed Solih has announced the Maldives’ partnership with Parley for the Oceans, an organization specifically dedicated to fight against the proliferation of plastic pollution in the Oceans. The President made this announcement speaking at the function held in Cooper Hewitt Museum in New York to mark this exciting new partnership.
Highlighting on the adverse effects of marine plastic pollution, President Ibrahim Solih noted that Maldives’ traditions, way of life, and even language have been heavily influenced by the sea. He stressed that protecting this precious resource is linked to the very survival of the Maldives.

“Ocean pollution not only threatens to compromise the two major industries that form the bedrock of the Maldives’ economy, tourism and fisheries but threatens to decimate the coral reefs that form our very islands. To us, this is an existential crisis,” he said.

The administration, since taking office, stressed a foreign policy intended to raise the profile of environmental issues, placing particular emphasis on the ocean’s health. “We have thus far undertaken several measures intended to reduce and ultimately eliminate single-use plastic in the workplace and in consumer lifestyles. Our aim is for the Maldives to become plastic-free by the year 2023,” he continued, reiterating the announcement he made in his maiden address to the United Nations General Assembly.

Calling upon businesses to change their practices, President Mohamed Solih urged them to avoid plastic packaging and embrace the use of environmentally-responsible materials. He further called on the international community, especially businesses enterprises, to do their due diligence in regulating their businesses to reduce their plastic products output.
Emphasizing Maldives’ pursuit to position itself as a global “champion of change,” the President said the Maldives will strive to set the example and take initiative to do as much as it can. “Realistically, however, our sole efforts will not suffice. The scale of the problem is too large. The spread of plastic waste in our ocean is a borderless issue that demands a concerted global effort in response,” he added.

Speaking further about the partnership with Parley for the Oceans, President Mohamed Solih noted that it was one organisation which truly understands how deeply ocean health is entwined with human security. He further applauded Parley’s local chapter—Parley Maldives—and its efforts to raise awareness on the fragility of the ocean.
Through the partnership with Parley, the Maldives will support the implementation of the Parley AIR Strategy: Avoid plastic where possible by education and communication and offering alternative solutions to single-use plastic; Intercept plastic waste and channel it to reuse, reducing the production of virgin plastic; and Redesign and create alternative and new solutions with new material technologies and new product design.