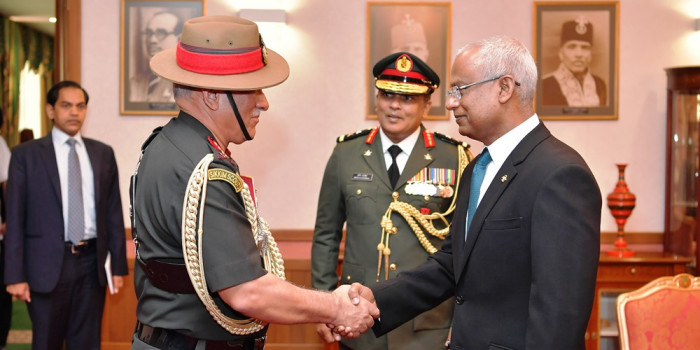 Chairman of Chief of Staff Committee and Chief of Army Staff of India, General Bipin Rawat has paid a courtesy call on President Ibrahim Mohamed Solih. The call took place this morning at the President’s Office.

President Ibrahim Mohamed Solih extended a warm welcome to the General and accompanying delegation upon arrival at the President’s Office. Discussions at the meeting were focused on areas for further cooperation and addressed issues of common significance.

Speaking at the meeting, President Solih highlighted the warmth and affection that marks the relationship between the two countries. Noting the closeness accorded to the Maldives by Prime Minister Narendra Modi’s Government, President Solih said the recent visit by the Prime Minister to the Maldives reaffirmed the relationship. He further spoke about the joint efforts by both nations to address terrorism and maritime security concerns in the Indian Ocean Region. He also thanked the Indian Government for its continued mutually beneficial assistance, especially in the areas of defence and security.

Thanking the President, the Ministry of Defence and Maldives National Defence Force for the warm hospitality arranged during his visit, the Indian Chief of Army Staff described the Maldives as the heart of the Indian Ocean.