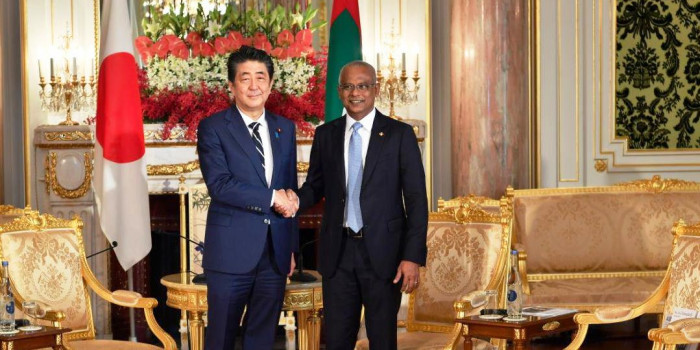 President Ibrahim Mohamed Solih has met with Japanese Prime Minister, Shinzo Abe, at a summit meeting held in Tokyo. The meeting took place as part of the President’s ongoing Official Visit to Japan.

The two leaders conversed on how best to forward bilateral relations between Maldives and Japan by building on the fruitful history of constructive engagement between the two countries. Japan continues to be the single largest aid donor to the Maldives, helping the country progress in infrastructural development and virtually all socio-economic spheres: from health to education, to climate-resilience and environmental conservation. Alongside the Maldives’ own national development efforts, Japanese aid was crucial in bolstering the Maldives’ successful graduation from Least Developed Countries (LDCs) to Middle-Income Countries (MICs) status in 2011. During the meeting, the President extended his heartfelt gratitude to Japan’s government and people for all that it has done for the Maldives over the years.

As President Solih’s administration seeks to realize an ambitious development agenda at home, entailing: a shift to a decentralized governance framework and a transformed economy that will benefit all citizens equitably, the Maldives is once again in need of the help of our international partners. Accordingly, discussions centred around how future engagement between the two countries can complement President Solih’s domestic initiatives, availing Japanese technical assistance and entrepreneurship in areas such as governance, infrastructural development, and fiscal policy.

Further, the discussions touched on increasing the number of Japanese tourists to the Maldives, facilitating better air travel between the two countries and enhancing cooperation in the multilateral fora.
The President also conveyed his congratulations to Emperor Naruhito for his ascension to the Chrysanthemum Throne, and also relayed his deepest sympathies for those affected by Typhoon Hagibis which devastated the Kantō region of Japan last week.

At the meeting’s conclusion, the President wished Prime Minister Abe well in fulfilling his duties to the Japanese people which the Prime Minister reciprocated in turn, and invited the PM to undertake a visit to the Maldives.