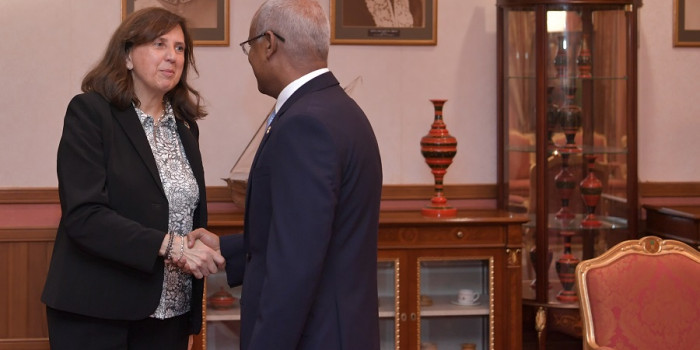 Welcoming Ms Pampaloni and her delegation, President Solih expressed his gratitude towards the continued support and cooperation extended by the European Union (EU) to the Maldives. In this regard, the President emphasised that Maldives-EU relations have significantly strengthened under his Administration.

Stating that the Administration was eager to open a new chapter in the relationship by hosting the first-ever Maldives-EU senior officials’ meeting, President Solih highlighted some of the areas the Maldives was keen on further exploring. Thereby, the President stressed on Maldives’ interest to ease the current tariffs placed on Maldives’ fish exports and reforming its tax regime.

Speaking at the meeting, Ms Pampaloni underscored the progress and positive developments the Maldives has made over the past year. Applauding Maldives’ commitment to democratic reform, she expressed the EU’s intention of working closely with the Administration in avenues of mutual concern.

President Solih and Ms Pampaloni also discussed ways to strengthen further cooperation in the field of combatting terrorism and violent extremism. The meeting concluded with the President and Ms Pampaloni expressing their keenness on increasing partnerships and building people-to-people contact between the Maldives and EU member countries.