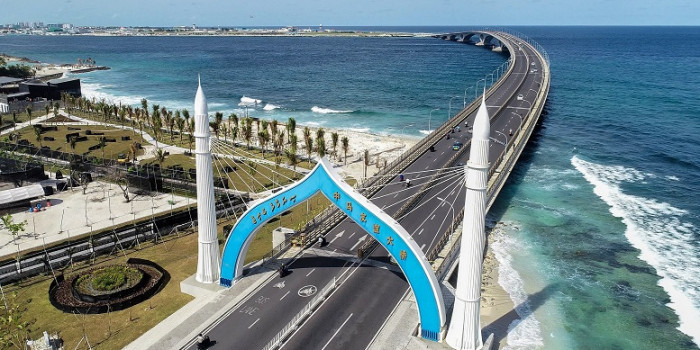 Three years since the Maldivians rejoiced the opening of the China-Maldives Friendship Bridge.

Three years since the Maldivians rejoiced the opening of the China-Maldives Friendship Bridge.

Yesterday (30th August) marked the third anniversary of the inauguration of the China-Maldives Friendship Bridge. The bridge was completed with a generous grant component from China. Hence, the name given to the bridge is fittingly appropriate.

As a result of the opening of the bridge, four islands—Malé, Hulhulé, Hulhulumalé and Farukolhufushi are now interconnected and the physical size of the capital, Malé has increased severalfold. This in turn has led to a rapid growth in economic activity. While existing businesses flourished and expanded, new business and employment opportunities have also been created. The bridge has also contributed to the consolidation of the electric supply of the  interconnected islands.

Even though, the piers of the bridge had to be built at a greater depth than originally envisaged and much extra work had to be done, the work was completed within a short period of time thanks to the competence of the Chinese contractors.

The people of the Maldives gratefully acknowledge the valuable gift from China and greatly appreciate that with the completion of the bridge, the Chinese President Xi Jinping has fulfilled a pledge that he had given in front of the Maldivian people during his state visit to the Maldives.