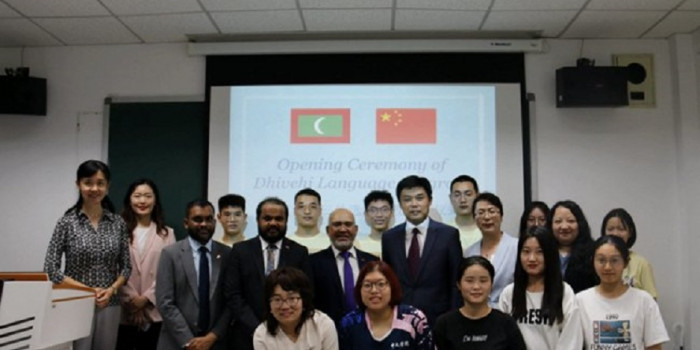 On the evening of 7th September, the School of Asian Studies of Beijing Foreign Studies University held the opening ceremony of the Dhivehi language program, which is the first time a Dhivehi course is offered in a Chinese domestic university. Professor Zhao Gang, the Vice President of the University, and Sobah Rasheed, Deputy Ambassador of the Embassy of Maldives in China, attended the opening ceremony and delivered speeches. The ceremony was hosted by Zhu Fangfang, the Dhivehi teacher in the school of Asian Studies.

Zhao Gang said that this year is the 80th anniversary of the founding of Beijing Foreign Studies University and the 60th anniversary of the founding of the school of Asian Studies, so the launch of the Dhivehi course is particularly meaningful. The university attaches great importance to the development of the Dhivehi language program and has selected outstanding teacher candidates to study Dhivehi in the Maldives. With the interest of the Maldivian Embassy in China and the concerted efforts of all, the launch of Dhivehi was welcomed. Dhivehi is the only official language of the Maldives and carries with it a long history and a unique and splendid culture. The launch of the Dhivehi language program will help the young generation in China to gain a deeper understanding of the history and culture of the Maldives and promote educational and cultural exchanges between the two countries.

Deputy Ambassador Sobah Rasheed started his speech with a wonderful traditional greeting in Dhivehi. In his speech, he said that the Maldives is a small country and the unique language of Dhivehi is spoken only in the Maldives, and this is the first time in history that a course dedicated to Dhivehi has been offered in an international university. The introduction of a Dhivehi language course at BFSU is not only a testimony to the long-standing friendly relationship between the Maldives and China, but also a model for the international community to build efficient ties and develop further engagement between a large country and a country of small size.

China and the Maldives have a long history of interaction, with diplomatic relations formally established in 1972. Over the past half century, the friendly and cooperative relationship between the two countries has continued to improve and develop, and in recent years, has continued to strengthen through increasingly frequent humanistic exchanges. As the first university in China to offer the Dhivehi language program, Beijing Foreign Studies University is actively training teachers and preparing for the construction of the program, making a positive contribution to the further deepening of friendly exchanges between the two countries.

At the end of the opening ceremony, the leaders of Beijing Foreign Studies University and the delegation of the Embassy of Maldives in China exchanged gifts.

The opening ceremony was attended by: He Jing, Director of the Department of International Exchange and Cooperation of Beijing Foreign Studies University; Su Yingying, Dean of the school of Asian Studies; Jiang Xiaoxiao, Head of the Sinhala Department; Zhou Liqun, Head of the Sanskrit and Pali Department; and all the students who enrolled with the course.