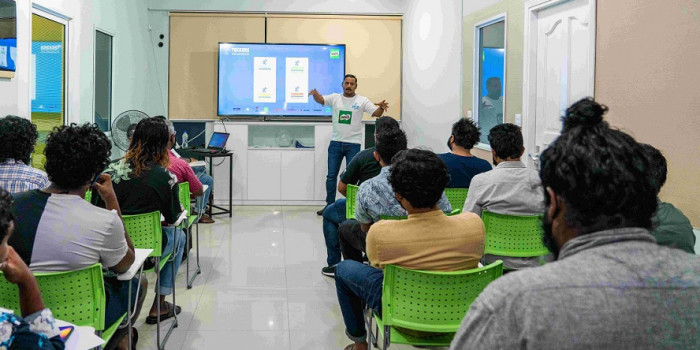 The draw has been made for the first Tekkers Milo Championship greater Male’ Cup which kicks off on the 24th of September 2021 (Friday) at 16:00 hours.

The short ceremony was held on the 19th of September 2021 whereby managers of all participating teams were present to take part in the draw. The organizers briefed the gathering about what “Tekkers” stands for, the structure of the tournament and what to expect in this upcoming tournament. Next, Head Referee Haji spoke about the rules of the tournament and advised teams on the importance of discipline and fair play.

A total of 32 teams took part in the draw which determined who they will play against on the first two days. Below is how the teams were pitted against each other:

The excitement remains high for the Greater Male’ Cup as Tekkers has been revealing the participating teams as well as must-watch players of the tournament. It has been announced that the multi-talented Ibrahim Amaan Hussain and Tiktok sensation Ayminath Shaana will be the commentators for the tournament.

The unique aspect of Tekkers tournaments is that all matches will be televised live on “Tekkers Maldives” social media platforms as well as on ICE TV via Medianet. Tekkers website “https://www.tekkers.mv/” will be updated in real-time showcasing the viewership on playing teams, scores, goals scored, assists and cards shown. A team of videographers and photographers will work throughout the tournament to bring extensive replays, highlights, and player interviews for an immersive experience for the viewership.

Tekkers Milo Championship “Greater Male’ Cup” will be followed by “Tekkers Resort Cup” which will engage the tourism sector of Maldives and is set to take place in the month of October 2021. Next, Tekkers will host the “Tekkers Maldives Cup” which is focused on all the islands in the Maldives. The winning team will be crowned as the National Futsal Champion Island with prize money along with the championship medals and trophies.