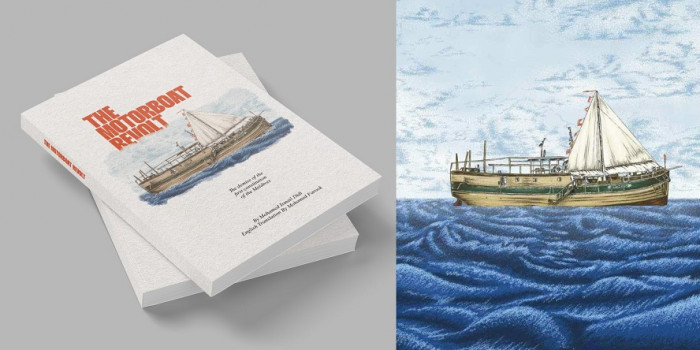 The famous book about the demise of the first Maldivian constitution, “Motorboat ge Gadubadu (“The Motorboat Revolt”) translated to English.

The famous book about the demise of the first Maldivian constitution, “Motorboat ge Gadubadu (“The Motorboat Revolt”) translated to English.

The famous Dhivehi book, “Motorboat ge Gadubadu” by Meerubahuruge Mohamed Ismail Didi has been translated to  English and is now available worldwide on Amazon.com. The book was translated to English by Mohamed Farook.

A written constitution was first introduced to Maldives on 22 December 1932. But less than a year after it came into force, the people of Malé revolted against the new constitution, tore it up and demanded that the most vocal supporters of the constitution, including some ministers be exiled to various islands. They were then put on board the Maldivian Government-owned ship, M.V. Fathu-hul Salaam, nicknamed, the ‘Motor Boat’ anchored off Malé until they could be taken to the selected islands. But before they could be exiled, they escaped to Colombo by the ‘Motor Boat’. Hence, the revolt against the constitution came to be referred to as the Motorboat Revolt.

The author of this book, Mohamed Ismail Didi who at that time held the position of the Deputy Minister of Trade was among those who escaped to Colombo. This vivid account of the demise of the first constitution of Maldives and the subsequent fall of the then Sultan Mohamed Shamsuddeen III of Maldives was written by Mohamed Ismail Didi from his diary notes.

The English translation of the “Motorboat ge Gadubadu (The Motorboat Revolt) is available on Amazon.com as a paperback as well as an e-book. Recently Mohamed Farook has also translated Hussein Salahuddeen’s book “Suveyhu Kaaveni” under the title, “The Wedding of a Maldivian Sultan in Suez: The Suez Wedding. This book is also available on Amazon.com.