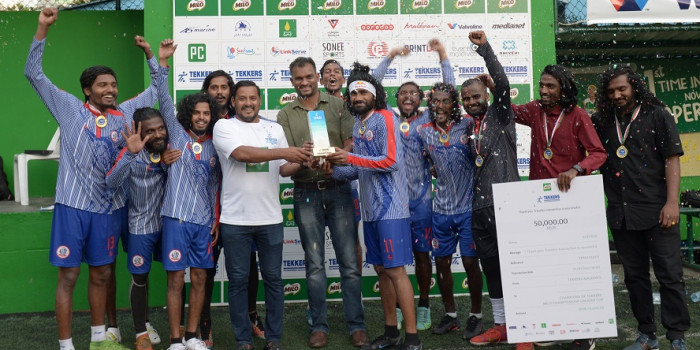 Tekkers Milo Championship Greater Male’ Cup 2021 has concluded on the 5th of October 2021 (Monday) with Masodi Sports Club winning the title of champions. The final game was played between Masodi Sports Club and Deadmaus at the Teenage Futsal ground kicking off at 4:30 pm.

The chief guest for the final match and awarding ceremony was Nestle representative to Maldives Mr. Dhishan Vijayavardhana. He accompanied by Managing Director of Print Lab and Honorary Consul of Czech Republic in the Maldives His Excellency Mr. Madeeh Jamal as well as Mr. Ismail Shareef, Operations Manager at Al Shaali Marine Maldives representing partners of Tekkers.

Tekkers Great Male’ Cup will be followed by “Tekkers Resort Cup” which will engage the tourism sector of Maldives and is set to take place in the month of November 2021. Tekkers will host the “Tekkers Maldives Cup” which is focused to all the islands in Maldives. The winning team will be crowned as the National Futsal Champion Island with prize money along with the championship medals and trophies.