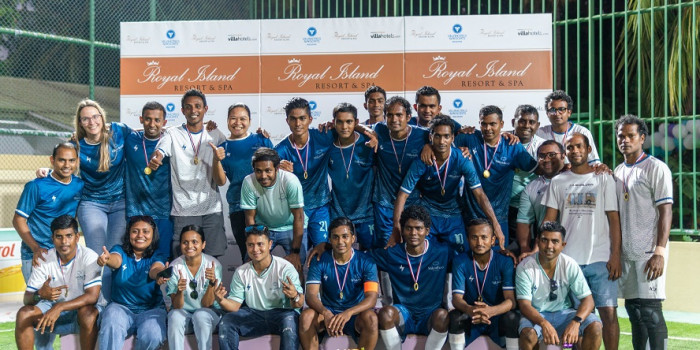 Tekkers Maldives concluded the Baa Atoll zone of Tekkers Resort Cup. After a comfortable final match against neighbors Soneva Fushi, Milaidhoo Maldives dances their way to victory with no pressure.

For the Baa Atoll final, Milaidhoo and Soneva Fushi senior members joined together to witness the showdown.

In the first half of the final match, it was a very even game for the first few minutes as both teams started getting into the game. Then in the 15th minute Milaidhoo managed to get the breakthrough when keeper Adam Naseer threw a long ball forward which Haaishim Faheem connected to via a powerful header. Then in the last minute of the half Unais Zubair of Milaidhoo doubled the lead to give them some safety. With the support of passionate fans, Milaidhoo Maldives felt no difficulty from the away fans. In the Second half, Soneva Fushi managed to get a goal back after a routine set piece play ended by Mohamed Faris of Soneva. Milaidhoo extended the lead with an amazing long range shot from Milaidhoo’s Ali Abdul Hakeem. From there on Milaidhoo managed to dominate the game as Ali Naseer of Milaidhoo then put in an excellent performance to score a hattrick in the remaining minutes of the half to end the match.