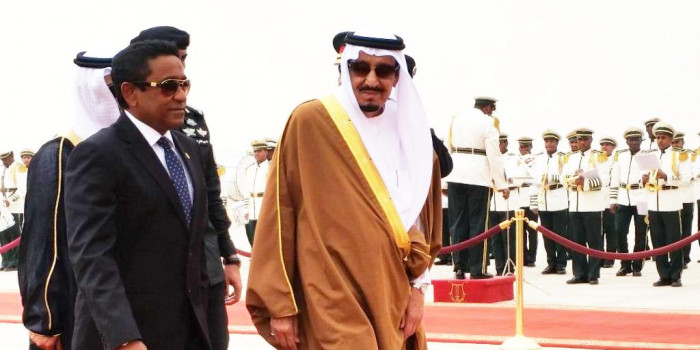 Maldivian Ambassador to Saudi Arabia and Kuwait, Abdulla Hameed has said that Saudi Arabia wants to make a mega investment in Maldives.

He made this remark speaking at a press conference held at the Foreign Ministry regarding the visit of President Abdulla Yameen Abdul Gayoom to Saudi Arabia.

Abdulla Hameed said that there are no clandestine deals with Saudi Arabia. He said that Saudi Arabia wants to make their investment clear and transparent.

He denied the rumours that President Yameen made an agreement to give an island to King Salman bin Abdul Azeez.

He noted that the Saudi Arabian Government has increased its allocation of scholarships to Maldivian students to one hundred and fifty, from its original fifty scholarships.

In the field of economic, commercial, and investment relations, the two sides have agreed to develop these relations and increase their commercial exchange while expanding and enhancing investment between the two countries and extending invitations to their respective private sectors to explore the available investment opportunities in both countries.

The Saudi Fund for Development will continue to finance the development projects in the Republic of Maldives and will consider participating in the expansion of Male’ airport and beaches preservation in Hulhumalé.

For the purpose of deepening the educational and cultural cooperation, the Kingdom of Saudi Arabia has announced the allocation of one hundred fifty scholarships for students from the Republic of Maldives.

The two sides have agreed to finalize the procedures leading to the signing of an agreement in Islamic affairs between the two countries.

At the end of his visit, President Abdulla Yameen Abdul Gayoom expressed his thanks and appreciation for the Custodian of the Two Holy Mosques King Abdullah bin Abdulaziz Al-Saud for the hospitality granted to him and his accompanying delegation.