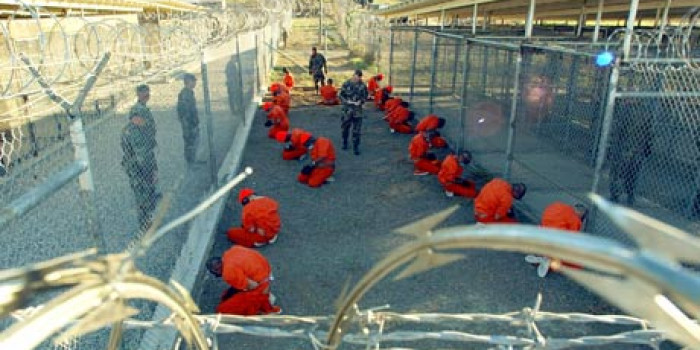 A gitmo in Maldives?

A gitmo in Maldives?

Is it true that a prison following the footsteps of the notorious Guantanamo Bay Detention Camp is going to be built in Maldives? Or is it from the goals of the current government to open such a prison?

Well, the recent speech of the Home Minister Umar Naseer at the official function held to mark the 82nd ‎anniversary of the Maldives Police Service does make us raise these questions.

We are yet to study how the two situations mentioned by the Home Minister are related to our small island nation.

Umar Naseer said that no democratic country will give any chance for the society to be destroyed in the guise of democracy since the main goal of democracy is to establish peace and stability. He said that marching with the placards of democracy will come after establishing safety and security.
Umar Naseer cited two examples as evidence. The first being, according to him the British passed draconian laws against the Germans during the Second World War to arrest and detain all Germans in Britain without any trial.

“This shows that these democratic countries have shown that it is from democratic principles to implement temporary laws to establish and protect the peace and stability of the nation.”

Umar Naseer could have cited Maldives as an example of such draconian measures. During the thirty year rule of the current President’s half brother, Maumoon Abdul Gayoom people were arrested without any trial without any prior notice. An islander will get a notice to come to the capita Male’ immediately. Once they come they will be arrested without even knowing the reason for the arrest.

His family will have to beg from one leader to the other without no mercy. Arrests were made for simple issues such as opposing to go fishing in the island chief’s fishing vessel.

The next example Umar gave was the notorious camp of US in Guantanamo Bay which is now abbreviated as Gitmo.

Since the establishment of Guantánamo Bay Detention Camp for this purpose, the US and the camp has come under fire from some US citizens, from a number of human rights organizations, and from other countries. Most detainees are held without the right to legal counsel, and since they are considered unlawful combatants rather than prisoners of war, rules on the safe and humane treatment of prisoners do not have to conform to the Geneva Code. Detainees are investigated through a number of practices, which some may define as torture. This includes the practice of water-boarding, other aggressive interrogation techniques, and some denial of basic rights accorded to most US prisoners, such as allowing people to continue to live in accordance with their religious beliefs.

Umar Naseer said that all this shows is the importance of peace and stability of a nation over the beautiful and alluring slogans such as democratic values.

Umar Naseer added that these two examples are not of whom people refer to as dictatorships but by the champions of democracy.

Well, again the water boaring and the human rights abuses of the Gitmo is not strange or new to the small island nation. Much gruesome torture methods have been used in Gamadhoo Jail, Maafushi Jail and Dhoonidhoo Jail.