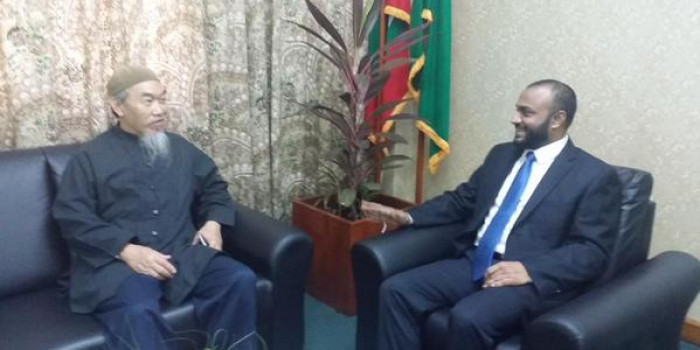 Islamic Ministry has been organizing monthly religious lectures entitled “The Message.” Other than the first lecture all lectures were given by world famous Islamic preachers.

Analysts believe that visiting scholars are misinformed regarding the current situation of Maldives. As a result they are not able to decide whether the problems in Maldives lie within the people or the youth or within the government itself.

O respected scholar, Sheikh Hussain Ye. You are scheduled to give tomorrow night’s lecture. Are you informed of the most important area that needs rectification in Maldives with enlightening religious lectures?

O my esteemed Muslim brother. Come out from the government officials around you and meet the people to know the situation of Maldives from unbiased sources. The reality of affairs will become crystal clear.

O my beloved scholar. 85 percent of the citizenry of Maldives believe that there is not an iota of justice in the Maldives today. Wealth of the people is usurped with no shame and fear towards Allah. Government is framing veterans and those who they do not like as “terrorists” and imprisoning them unjustly and unfairly.

O Sheikh! The founder of Villa Foundation, Gasim Ibrahim is arguably the most inspirational leader in our country. His understanding and warmth towards the people of Maldives is possibly what has made him the prolific and the modest figure Maldivians love. Gasim Ibrahim managed and succeeded the largest the most ethical company operating in the Republic of Maldives. He is the philanthropist who assisted most Maldivians. He is the only individual who provides most services to Maldivians. He is a model patriot in nation’s service.

Today the government is trying to usurp the wealth of Gasim Ibrahim without any due right. The government is disregarding and breaching every agreement made with his company to destroy him.

Gasim Ibrahim is not a person who bulks his finances in bank accounts. He generously uses his wealth for philanthropy assisting the people with their needs.

Without any prior notice they have suddenly fined with 100 million US dollars again unjustly. They want to make him totally bankrupt. They are depriving the people of the assistance he has been providing them with since long. They are leading the people to poverty to enslave them.

And ponder O Sheikh how the government treated their own Defence Minister who was one of the leading and most productive minister of this government. Police entered his house in the middle of the night while he was asleep. They banged down the door and pointed weapons at the head of their own Defence Minister and his wife made them kneel down. They dragged them out and stayed in the room. They confessed in the court of law that they stayed in the room without the presence of the minister or his wife during the raid.

And out of a sudden they produced a black bag which they say was confiscated from the room and from it they took a used pistol and three bullets. After taking it to the Police custody they found a pen drive which they were unable to find at the house.

At the court of law the Police confessed that the finger prints on the weapon was not that of the Defence Minister Colonel Nazim or that of his family members. Nazim requested to do an independent forensic analysis of the evidences but it was denied.

The trial was not help openly as in the religion of Islam. Only a few selected people were allowed into the court room.

Now he is in prison with a sentence of 11 years with the “Terrorist” label.

O respected Sheikh! With which intellect can a person be accused with a crime based on evidence taken from his residence in his absence? Is this justice? Is this how it is ordained in our religion of justice, Islam? Please answer for the sake of Allah!

Former President of Maldives is among those who is accused of terrorism and is now sentenced for 13 years in prison. World class lawyers are now advocating in his defence.

More than hundred from the common people are held as prisoners for the “crime” of standing against this tyranny of the government. They are on the way to be prosecuted and most likely sentenced to prison for many years.

O esteemed Da’ee! You are a scholar calling to the way of Allah. You are a beloved scholar calling to justice and fairness. Why not call this despotic government to the truth and justice? Why not assist this oppressing government by lending a hand of rectification by enlightening them regarding the justice ordained in Islam? For indeed, oppression is not from Islam. For indeed, Islam calls to justice and equality.

O my beloved brother in Islam! This government celebrated the new Year of the Christians by inviting world famous singers and musicians. Help music shows and DJs thereby spreading promiscuity and immorality among the youth.

The Islamic Minister and the religious scholars repeatedly clarified to the government that this is wrong and an evil. However, they did not heed but challenged the scholars and stated that they will hold it and will continue organizing such music shows.

O beloved Sheikh! I am only informing this because I believe that you must know this reality of Maldives. I end this hoping that you will accept my pleas and will admonish the government with sincere admonition to rectify the tyranny of the government.